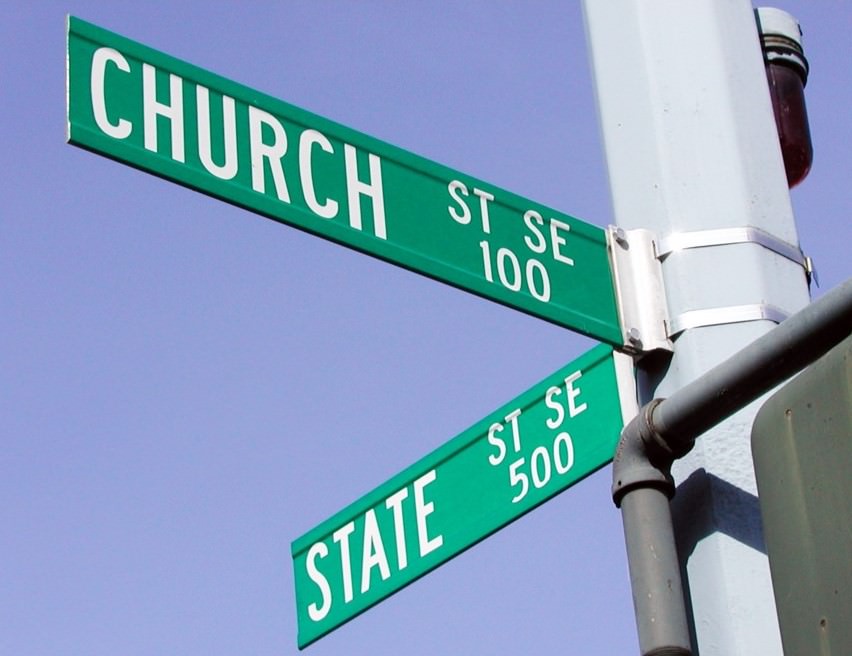 Debunking The ‘Separation of Church and State’ Myth

The American church has a problem. It’s one part fear, one part confusion and one part apathy. Pastors, priests and rabbis have long swallowed the false notion that all things religious and all things political are somehow mutually exclusive—that never the twain shall meet.

Leading up to Ronald Reagan’s landslide presidential victory in 1980, Rev. Jerry Falwell, the founder of Liberty University, captured the crux of the church’s apathy problem. “I’m being accused of being controversial and political,” he said. “I’m not political. But moral issues that become political, I still fight. It isn’t my fault that they’ve made these moral issues political. But because they have doesn’t stop the preachers of the gospel from addressing them. …”

“What then is wrong?” he continued. “I say the problem, first of all, is in the pulpits of America. We preachers must take the blame. For too long we have fearfully stood back and failed to address the issues that are corrupting the republic. I repeat Proverbs 14:34: ‘Righteousness exalteth a nation.’ Not military might, though that’s important. Not financial resources, though that has been the enjoyment of this nation above all nations in the last 200 years. But spiritual power is the backbone, the strength, of a nation.”

Indeed, it is not just within the church’s purview, but it is the church’s duty to insert itself into state matters relating to morality, public policy and culture at large.

Contrary to popular opinion, the words “separation of church and state” are found nowhere in the U.S. Constitution. Yet many are misled into believing they are.

So why the confusion?

It’s been intentionally fomented. It’s the byproduct of a decades-long religious cleansing campaign. The First Amendment’s “Establishment Clause,” a mere 10 words, is the primary tool secular separatists misuse and abuse to “fundamentally transform” America to reflect their own anti-Christian self-image.

Yet these words remain abundantly clear in both scope and meaning. The Establishment Clause states merely: “Congress shall make no law respecting an establishment of religion. …”

And the founders meant exactly what they said: “Congress,” as in the United States Congress, “shall make no law respecting an establishment of religion.”

In a letter to Benjamin Rush, a fellow-signer of the Declaration of Independence, Thomas Jefferson, often touted by the left as the great church-state separationist, spelled out exactly what this meant then, and what it means today. The First Amendment’s Establishment Clause was simply intended to restrict Congress from affirmatively “establishing,” through federal legislation, a national Christian denomination (similar to the Anglican Church of England).

As Jefferson put it: “[T]he clause of the Constitution” covering “freedom of religion” was intended to necessarily preclude “an establishment of a particular form of Christianity through the United States.”

The individual states, however, faced no such restriction. In fact, until as late as 1877, and after religious free exercise became absolute with passage of the 14th Amendment, most states did have an official state form of Christianity. Massachusetts, for example, sanctioned the Congregational Church until 1833.

Even so, today’s anti-Christian ruling class insists on revising history. The ACLU’s own promotional materials, for example, overtly advocate unconstitutional religious discrimination: “The message of the Establishment Clause [to the U.S. Constitution] is that religious activities must be treated differently from other activities to ensure against governmental support for religion,” they claim.

This is abject nonsense. It’s unconstitutional viewpoint discrimination—a twisted misrepresentation of the First Amendment. Secular “progressivism” depends upon deception as much as it relies upon revisionism. Yes, “separation” applies, but only insofar as it requires the state to remain separate from the church. That is to say, that government may not interfere with the free exercise of either speech or religion.

For decades, hard-left anti-theist groups like the ACLU, People for the American Way (PFAW) and Barry Lynn’s Americans United (AU) have employed a cynical disinformation scheme intended to intimidate clergy into silence on issues of morality, culture and Christian civic involvement—issues that, as Falwell noted, are not political so much as they have been politicized; issues that are inherently “religious.”

AU, for instance, annually sends tens-of-thousands of misleading letters to churches across the nation warning pastors, priests and rabbis that, “If the IRS determines that your house of worship has engaged in unlawful intervention, it can revoke the institution’s tax-exempt status.”

In reality, there is no legal mechanism whatsoever for the Internal Revenue Service to take away a church’s tax exemption. Churches are inherently tax-exempt, or, better still, “tax immune,” simply by virtue of being a church. Churches do not need permission from the IRS, nor can the IRS revoke a church’s tax immunity.

The case involved the Church at Pierce Creek in New York, which placed full-page ads in USA Today and the Washington Times opposing then-Gov. Bill Clinton for president. The ads were sponsored by the church, and donations were solicited. The IRS revoked the church’s letter ruling, but not its tax-exempt status. The church sued, and the court noted that churches are tax-exempt without an IRS letter ruling. It ruled that “because of the unique treatment churches receive under the Internal Revenue Code, the impact of the revocation is likely to be more symbolic than substantial.” Not even this church lost its tax-exempt status, and not one donor was affected by this incident.

As Mat Staver, founder of Liberty Counsel has observed, “Pastors can preach on biblical, moral and social issues, such as natural marriage and abortion, can urge the congregation to register and vote, can overview the positions of the candidates, and may personally endorse candidates. Churches may distribute nonpartisan voter guides, register voters, provide transportation to the polls, hold candidate forums, and introduce visiting candidates.”

Since 2008, the Christian legal organization Alliance Defending Freedom has spearheaded a First Amendment exercise called “Pulpit Freedom Sunday.” Since then, thousands of pastors across America have boldly exercised their guaranteed constitutional rights by addressing “political” issues from the pulpit. This has included directly endorsing candidates. These pastors have dared the IRS to come after them, and, not surprisingly, the IRS has balked.

Pastors, this election season follow the lead of Christ. Speak moral/political truths, in love, fearlessly. Remain undaunted by the threat of government intervention or punitive action by the state. And encourage your congregation to vote for candidates who sincerely reflect, in both word and deed, a biblical worldview and biblical principles.

Be “salt and light.”

Because Christ didn’t give us an option to do otherwise.

To See the Original Article in Charisma News Click Here

Matt Barber is founder and editor-in chief of barbwire.com. He is an author, columnist, cultural analyst and an attorney concentrating in constitutional law. Having retired as an undefeated heavyweight professional boxer, Matt has taken his fight from the ring to the culture war.

NEXT up in Historical Civic Involvement