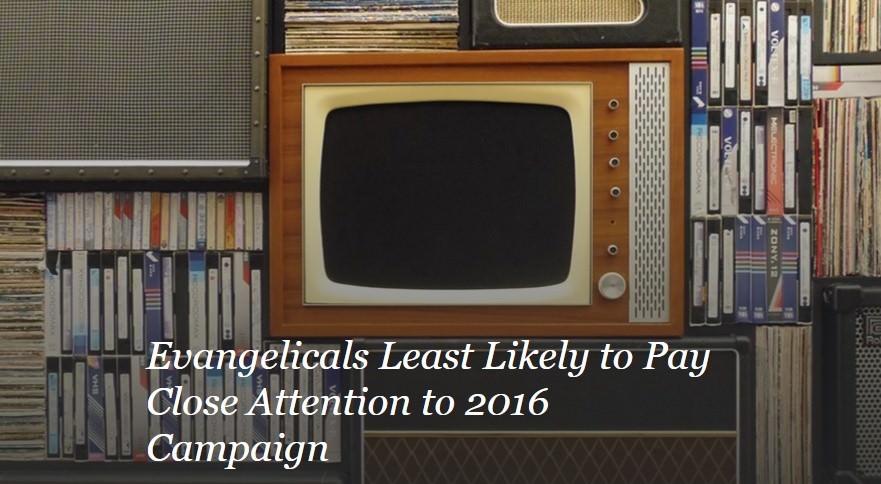 Although American voters acknowledge how poorly informed they are about the candidates they vote for, they just as frequently blame the media for doing an inferior job of capturing their attention and providing useful and credible information. A national survey of registered voters by Barna Group suggests the 2016 election is no exception. The survey also underscores how people’s religious beliefs and behavior are related to their engagement with the 2016 campaign—sometimes in unexpected ways.

Contrary to past election cycles, evangelical Christians were actually the faith group least engaged thus far with the presidential race. Only one out of five evangelicals (20%) said they were following news about the campaign very closely. Voters who associate with non-Christian faiths (such as Judaism, Islam and Buddhism) reported the highest level of engagement: 41% were following campaign news very closely, which is twice the proportion among evangelical Christians. Even religious skeptics (atheists, agnostics and unaffiliated) were substantially more engaged in the race than evangelicals (36% vs. 20%).

In another unusual twist, Catholic voters reported paying closer attention to the race than Protestants (38% vs. 26%). In the past four presidential elections, the reverse was true.

What makes the indifference of evangelicals even more surprising is the fact that they are the religious segment most likely to characterize the outcome of this year’s presidential election as “extremely important to the future of the United States.” More than three-quarters (78%) classified the election in this way, compared to about half of the other faith groups, such as non-evangelical born again Christians (54%), notional Christians (52%), people aligned with non-Christian faiths (49%) and religious skeptics (57%).

This paradox may relate to people’s primary source of information about election news and activities: the media. Evangelicals have had a long-running feud with the media, believing they consistently (and intentionally) provide inaccurate and inadequate reporting of what is really happening in the world, including election-related events and information. Barna finds that just 5 percent of evangelicals believe the media is providing fair and objective coverage of the campaign. However, that figure is similar to the mere 8 percent of non-evangelical voters who believe the media is providing completely fair and objective news and information about the race.

So while neither the population at large nor any religious segment believes the media is performing well, a significant majority of evangelicals (51%) argues that the media’s handling of the campaign is either completely or mostly unfair and subjective. There is no other religious segment in which 30 percent or more believe that the media’s election coverage is completely or mostly unfair and subjective.

“When we look at a more accurately defined evangelical population—not the self-defined evangelicals used by media outlets—it’s certainly surprising to see this segment delay their focus on the race. And that is certainly all we’re talking about at this point: a group that is waiting to see what happens with the nominating process before devoting a greater mind share to election news. They admit this is a highly important election for the fate of the nation. They consistently strive to influence the direction of the nation. And the combination of evangelicals who are watching the unfolding of the race either very or somewhat closely is as high or higher than that of any segment. They are conscious of what is happening but not yet fully focused. We expect to see their attentiveness climb substantially over the next few months.”

Barna also pointed out the rise of another religious segment during this year’s race: people associated with faiths other than Christianity. “The presence of two outspoken fighters who have given voice to their views—through Mr. Trump and Mr. Sanders—has galvanized the attention and the hopes of many of those who are religious but not Christian. If Mr. Sanders eventually drops out of the race, this may dampen some of that enthusiasm in the months to come.”

To See the Original Article in Barna Group Click Here