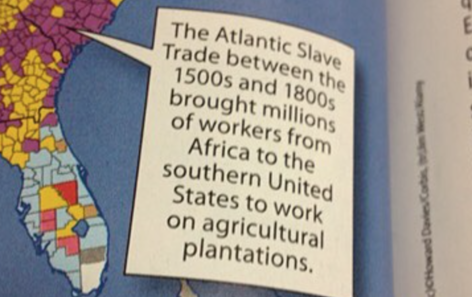 Roni Dean-Burren was shocked when her son sent a snapchat photo of his McGraw-Hill World Geography textbook. In the textbook they called African slaves “workers”. During a more thorough review of the textbook she realized that they described European indentured servants as working for “little or no pay” the text book does not mention black slaves. On Ms. Dean-Burren Facebook she posted a video saying “Erasure is real y’all!!! Teach your children the truth!!!”

Her video quickly grabbed the attention of publishing company McGraw-Hill. They promised to revise the textbook language about African slaves. McGraw-Hill Company released a statement saying “This program addresses slavery in several world lessons and meets the learning objectives of the course.”

Many historians and educators say our learning objectives are themselves the problem with our textbooks. On a review for social studies done by Thomas B. Fordham Institute, Texas received a “D” for its underachieving textbooks. With low scores around the nation The National Assessment of Educational Progress Institute says we are creating a “generation of students who don’t understand or value our own nation’s history.”

Category: Education, In The News, The National Headlines
Share: