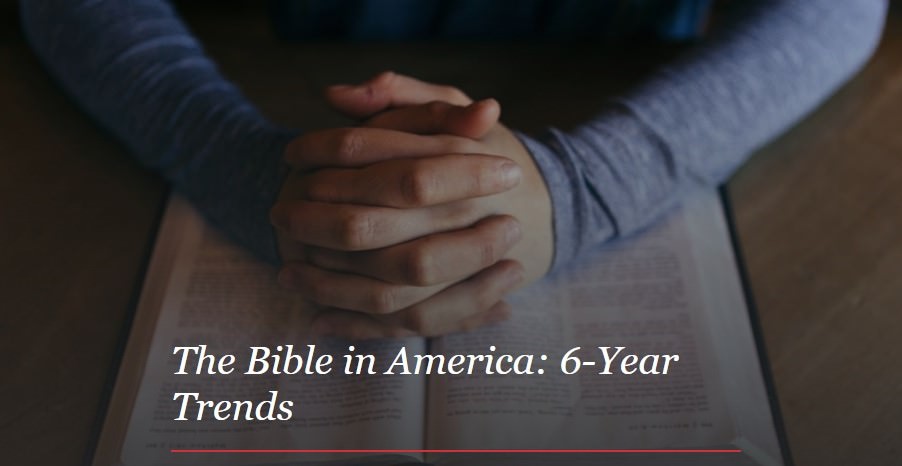 With over 5 billion copies sold, the Bible remains earth’s most-read book. But the world in which we read and engage with the Bible is rapidly changing. The steady rise of skepticism is creating a cultural atmosphere that is becoming unfriendly to claims of faith; the adoption of self-fulﬁllment as our culture’s ultimate measure of good is re-orienting moral authority; and the explosive growth of digital tools such as Bible apps, daily reading plans, study resources and online communities offer unprecedented access to the Scriptures.

In the last six years alone, we’ve seen unprecedented changes. Nearly a quarter of a century ago in 1991, 45 percent of American adults told Barna they read the Bible at least once a week. In 2009, 46 percent reported doing so. These percentages were remarkably consistent over the course of nearly two decades. But since 2009, Bible reading has become less widespread, especially among the youngest adults. As more and more Millennials join the ranks of adulthood, the national average continues to weaken. Today, about one-third of all American adults report reading the Bible once a week or more. The percentage is highest among Elders (49%) and lowest among Millennials (24%).

For more than 30 years, Barna has studied the Bible’s role in and influence on American society, painstakingly collecting the pieces of data we need to understand the big picture. And for the past six years, we have partnered with American Bible Society to add depth and detail to the picture, and to identify changes over time. Since 2011, Barna has conducted more than 14,000 interviews with American adults and teens on behalf of American Bible Society to create annual State of the Bible reports. The Bible in America, released in May 2016 to commemorate American Bible Society’s bicentennial, represents one of the largest sets of aggregate data Barna has ever collected on any single topic.

There are a number of hopeful signs for those who advocate for the Bible’s continuing importance and influence:

What are the other major trends uncovered over the course of six years?

Skepticism on the Rise
The Bible remains the top choice among American adults asked to identify sacred literature, and the number of people who choose the Bible, the Koran, the Torah and the Book of Mormon has remained relatively consistent through the years. However, the percentage of Americans who opt for “none of these” has doubled in six years, from 7 percent in 2011 to 14 percent in 2016. This increase is mostly thanks to Millennials (22%) and Gen-Xers (18%), who are significantly more likely than Boomers (8%) and Elders (7%) to say none of the options qualifies as a holy book.

Similarly, there is rising skepticism about the Bible as a sufficient guide for living a meaningful life. The percentage of people who strongly agree with the statement has contracted in six years from 53 percent in 2011 to 45 percent in 2016—and the percentages of those who disagree strongly or somewhat have increased over the same time frame, from 23 to 33 percent.

Trust in the Bible’s reliability is also dropping. Barna first asked American adults in 1991 if they agreed or disagreed that “the Bible is totally accurate in all of the principles it teaches.” Twenty-five years ago, 46 percent strongly agreed—close to half—but today, one-third of Americans say so. And the percentage of those who strongly disagree has nearly doubled in six years.

The national shifts in these three perceptions—the Bible is sacred literature, is sufficient as a guide for meaningful living and is reliably accurate—are the clearest indicators that skepticism about the Bible is gaining a stronger cultural foothold.

The overall trends are clear. Thus far, however, growing skepticism seems to have had minimal impact on Americans’ definitions of the Bible

Continuity in Defining the Bible
There has been remarkable consistency through the past half-decade when it comes to how Americans define the Bible; the changes from 2011 to 2016 are, for the most part, within the margin of error. However, Barna researchers expect to see significant shifts in the coming half-decade, as the proportion of Elders in the general population shrinks and the proportion of Millennials grows. Millennials (14%) are half as likely as Elders (29%) to believe the Bible is the actual word of God and twice as likely to believe it is a manmade book of teachings and advice (20% vs. 11% among Elders). (As we will see in a later section, among practicing Christians the distance between generations on this question all but disappears.)

It may be that the ongoing consistency we see in Americans’ definitions of the Bible is due at least in part to its ubiquity. Skepticism is on the rise, but a physical copy of the Bible is still a nearly omnipresent feature of American life: Nearly nine out of 10 adults and teens report owning a Bible, a proportion that has held steady over six years.

Bible Readers
Americans continue to own Bibles—but readership is not as ubiquitous as ownership. About one-third of Americans read the Bible at least once a week, and this proportion has remained fairly stable. Likewise, the two out of five American adults who read the Bible less than once a year or never has thus far proven to be a stable proportion. Unless something dramatically changes among Millennials, however, Barna researchers expect reading frequency in the general population to trend downward in coming years as Elders become a smaller share of the total: Half of Elders read the Bible at least once a week (49%), compared to one-quarter of Millennials (24%).

When it comes to the reasons people read the Bible, a relatively consistent majority of people does so because it draws them closer to God, though significant minorities in 2016 also point to a need for comfort (16%) or direction (16%). A majority also expresses a desire to read the Bible more than they currently do—about six in 10 American adults. This desire is a window of opportunity for leaders who care about increasing Bible engagement. Similarly, the “felt needs” that people bring to Bible reading represent an opportunity to help them engage more deeply with the Scriptures.

What the Research Means
“Even in just the few years Barna has been conducting ‘State of the Bible’ interviews, the data is trending toward Bible skepticism,” said David Kinnaman, president of Barna and director of the research. “With each passing year, the percent of Americans who believe that the Bible is ‘just another book written by men’ increases. So too do the perceptions that the Bible is actually harmful and that people who live by its principles are religious extremists.

“Of course, a healthy dose of skepticism means that people are still asking questions of faith, of Christianity and of the Bible,” Kinnaman continued. “I believe those questions, when asked and answered honestly and from a biblical point of view, can lead to the Spirit’s work in people’s lives.

“Thankfully, the data is not all bad news. In fact, our researchers continue to find bright spots that demonstrate the Bible’s cultural staying power and persistent hold on people’s hearts. Each of these realities, among others, is a window of opportunity open to leaders. But these windows are not likely to remain open forever, so we must take full advantage to advocate today for the Bible in our skeptical, self-centered, highly connected world.”

To See the Original Article in Barna Group Click Here