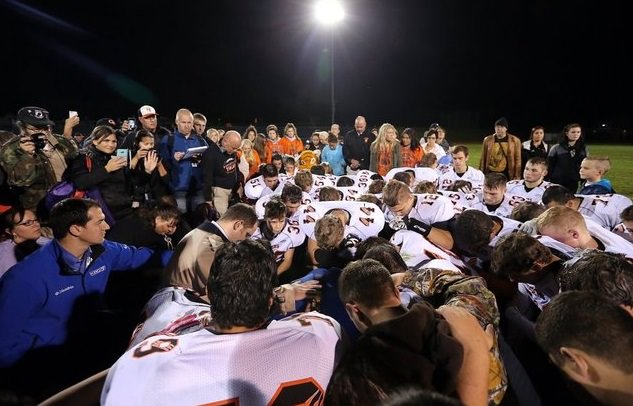 Despite the Kennedy school district saying no prayer after football games, Coach Joe Kennedy was joined for prayer on the 50-yard line by his team, members from the rival Centralia High School, State Rep. Jesse Young, R-Gig Harbor and parents who supported him. Each week after football games Coach Joe Kennedy says a simple prayer, ‘Lord, I thank you for these kids and the blessing you’ve given me with them. We believe in the game, we believe in competition and we can come into it as rivals and leave as brothers.’

His simple prayer has been marred by controversy. But that was never his intention , he says, ‘I always taught my kids to do what’s right…and fight for what you believe. The school district is standing firm on their decision to stop Joe Kennedy from praying. The school district says, ‘Kennedy must stop his prayers, which it says violates the separation of church and state.’

Coach Kennedy calls himself a God-fearing man who served in the marines for 20 years. He trusts he is ‘helping these kids be better people.” He says he doesn’t know the Constitution. However, ‘I spent my years defending it.’

To Read the Full Article: Seattletimes.com