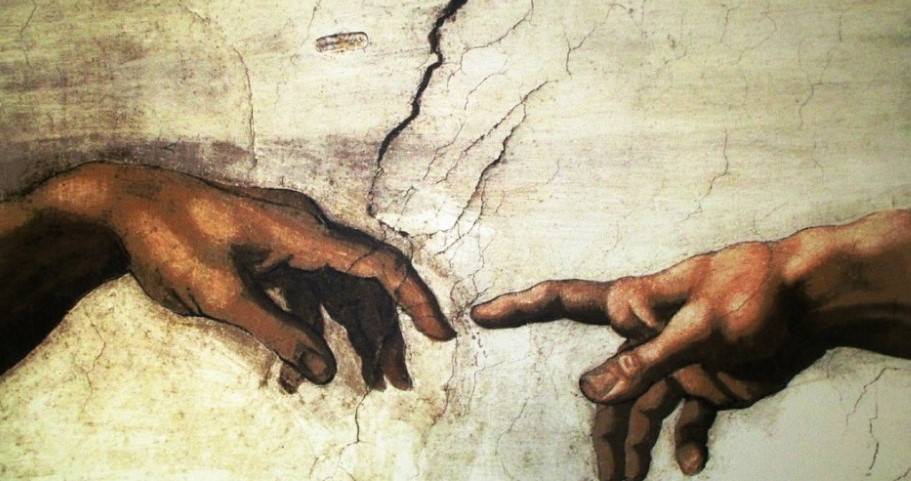 By Rob Schwarzwalder, Canon and Culture

Then God said, “Let Us make man in Our image, according to Our likeness; and let them rule … over all the earth” … God created man in His own image, in the image of God He created him; male and female He created them. Genesis 1:26-27

The Hebrew for “image” (tselem) comes from a “root meaning to shade; a phantom, i.e. (figuratively) illusion, resemblance; hence, a representative figure.” It is used in several Old Testament passages for idols (e.g., I Samuel 6:5). This point is emphasized by Robert Luginbill, professor of classics at the University of Louisville, who argues against any effort to eisegete the term: It “means ‘image’ in a fairly concrete sense; the word is often used for statues of pagan idols which, after all, are meant to be exact replicas of the god in question.”

“Likeness” (demût) means pretty much what it does in English – like something, but not the thing itself. As the theologian Gordon Wenham notes in his commentary on Genesis, the terms are used interchangeably in the Bible’s first book (for an example, see Genesis 5:3). John Piper summarizes, demût “is used uniformly in connection with a tangible or visual reproduction of something else. So again, as with tselem, the usage of demût urges us very strongly in the direction of a physical likeness.”

Just as a statue is not the thing it represents but is identifiable as an artifact resembling the real and original being, so are human beings as image bearers of the living God. We are not God but, in some ways, resemble Him. We are capable of having intimate relationships, of articulate speech, of intricate intellection, and so forth. We carry in our persons elements of His being.

The Satanic deception in the Garden (“you will be like God,” having the moral knowledge of and become a peer with Him) is an attack on both the sovereignty of God (as Satan himself had sought to dethrone God) and an attempt to soil human dignity (through Adam and Eve’s acceptance of the lie that they would not bear God’s image if they ate the fruit; they would become Him).

God created us male and female, each fully human and fully bearing God’s image, yet each distinct. The Genesis account says that God created Eve, a woman, because Adam needed a partner who “suited” him. The Hebrew term implies a being who corresponds to him, or “fits” him. The two are complementary, both image-bearers of God yet with unique characteristics as well (contemporary science supports the argument that these distinctions are discernable and permanent). As theologian Bruce Ware writes, “while God did intend to create male and female as equal in their essential nature as human, he also intended to make them different expressions of that essential nature, as male and female reflect different ways, as it were, of being human.”

This complementarity is the foundation of male-female relationship in marriage: Sexual and emotional, perceptual and experiential, biological and neurological.

This understanding of human personhood – male and female, equal yet distinct, created in only two sexes – is now being derided by many culture-shapers as antiquated, naïve, inadequate. Instead of receiving help, the sexually troubled are affirmed. Same-sex attraction and transgenderism are celebrated by popular culture and their normality is asserted as confidently as ancient claims that the world is flat.

“Diversity of gender is a normal part of the human experience, across cultures and throughout history,” claims the website GenderSpectrum.org. “Non-binary gender diversity exists all over the world, documented by countless historians and anthropologists. Examples of individuals living comfortably outside of typical male/female expectations and/or identities are found in every region of the globe.”

Yes, persons attracted to the same sex or who wish to wear the other gender’s clothing exist and always have. But although they are universally present, their numbers are rather miniscule and often not apparent visibly, and thus to claim them as “a normal part of the human experience,” as if an obvious male dressed as a woman is “normal,” is to demand a shrug when a furrowed brow is more natural.

The new insistence on sexual self-definition means public showers and restrooms have become forums of heated political debate instead of, respectively, cleanliness and intimate hygiene. Failure to participate in same-sex weddings places wedding vendors who affirm their faiths’ traditional beliefs about human sexuality are called haters, bigots, and so forth.

When in May President Obama’s Justice Department threatened states and localities with the loss of federal education aid unless they opened their restroom and shower facilities to people identifying as transgender, North Carolina Lt. Gov. Dan Forest issued this statement:

For this wholly reasonable statement, Forest has been called names too crude and/or ridiculous to publish here. Non-sequitur insults are the activist Left’s first rhetorical resort to counter arguments they cannot defeat and, concurrently, wish to silence. Their frequency, accompanied by threats of economic retaliation, coarsen public life and intimidate the cowardly (of whom there are, regrettably, too many, perhaps most especially in the corporate community).

Ultimately, the elevation of radical human sexual autonomy as one of the chief gods of the age is grounded in the delusion that each individual has both the right and the capacity for complete self-reinvention. We assert our godhood, inarticulately but with defiant persistence.

This has led to situations that are flabbergasting to the rational. As Dr. Peter Jones wrote earlier this year:

An employee of a Catholic university (Loyola Marymount) committed cultural blasphemy by stating that there are only two genders (a view entirely compatible with Catholicism). The university, however, has suspended her and is currently investigating her for a “hate crime.” It gets more manifestly insane. Students at my alma mater, Cardiff University, and in other UK schools, are demanding the installation of women’s sanitary bins in male toilets “for men who menstruate.” This is logical lunacy. The inevitable demand for urinals in women’s restrooms will surely follow.

Clear-headed theology reveals what is happening in our Left-leaning, progressive world. We are witnessing the reappearance of an old heresy, Gnosticism … Interestingly, the ancient Gnostics also rejected creational sexuality and sought the higher form of “androgyny,” the experience of being both male and female—which is the same rejection of the male/female gender binary that we observe today.

The dissolution of sexual difference (perceived and practiced, although itself intrinsically immutable as a matter of biology) will lead to the social chaos we are now beginning to experience. This may well lead eventually to the emergence of a fascist-type leader who will promise order and probably bring it, but with it will also bring an iron fist beneath which liberty is crushed.

Writing in The Public Discourse, Jason Wilson explains the liberal conceit that sex is merely a physical transaction between consenting persons:

Liberalism posits radical autonomy and then attempts to mediate those individual autonomies through contracts (“consent”). By contrast, sex draws two people into the most intimate form of community, forming a new relationship based on a shared totality of existence. Where liberalism deals in a world of unjoinable, antagonistic atoms, human sexuality strives to bring two atoms together in order to make an entirely different molecule.

Radical sexual autonomy bridles at such a molecular proposition. That’s why concerted efforts are being made by Left-leaning politicians, activists, journalists, and entertainers to fuse manhood and womanhood. They claim, confidently and persistently, that human sexuality is “fluid,” in the sense that one can lapse from one kind of sexual attraction to another with almost spontaneously.

University of Maryland social psychologist Dylan Selterman (who would not identify as a conservative) writes that “perhaps political liberals want to believe that sexuality is stable across the lifespan, thus giving credence to the idea that since people cannot change or control their sexual preferences (they are simply ‘born that way’), it would be a rallying cry for equitable treatment (equal rights) based on gender and sexual orientation.”

Selterman contends that “people’s sexual responses are not set in stone, and can change over time, often depending on the immediate situation they’re in. For example, if someone identifies as heterosexual but then finds themself (sic) in an environment with only people of the same gender, they might feel increased sexual/romantic attraction to those same-gender partners.”

That’s a big “might,” but is probably true of a relative handful of persons. That’s very different, however, from suggesting that human sexuality is a matter of arbitrary fluctuation or, at the opposite extreme, that same-sex attraction or opposite-sex identification cannot change.

“In the 1970s, I identified as a lesbian, and wrote about it,” says Chirlane McCray, wife of New York City mayor Bill DeBlasio. “In 1991, I met the love of my life, married him, and together we’ve raised two amazing kids. I’m reminded every day how lucky I am to have met my soulmate.”

Good for her. But this acknowledgement gives lie to the contention that sexual attraction is always immutable. For the overwhelming majority of us, it is: All but a small percentage of men are attracted exclusively to women, and vice-versa. But for those who are sexually attracted to members of the same gender, the possibility of change is evident from many testimonies like McCray’s.

No one should claim that sexual attraction can be turned on and off like a light switch. Personal friends who have been active gays and lesbians but who now embrace heterosexuality will admit freely that same-sex attraction will always be an issue in the background of their inner lives. However, in so affirming they are only acknowledging what those with any broken habit, good or bad, will say: A long-time, engrained pattern of behavior will always threaten to again grasp those who have discarded it. The grooves of the mind remain deeply cut.

New habits build slowly. For Christians, they all are based on identity in Christ, in the new creations each of us is in Him. The revolutionary transformation of character, heart, and mind that begins at the moment of our coming to Christ builds over time if we are purposeful about it. Habituation of virtue through deliberate and conscious effort based on Scripture’s norms and through the enablement of the Holy Spirit can happen. It is real. Not moral perfection, but the regulation of the inner life and of outer conduct and speech such that they reflect consistently the character of Jesus Christ.

Jesus is “the image of the invisible God” (Colossian 1:15; see also Romans 8:29, II Corinthians 4:4, Hebrews 1:3). He manifested, in His humanity, the glory and power of the Triune God. As God in the flesh, He demonstrated what the fullness of humanity could be.

In eternity, the Father, Son, and Holy Spirit had a complete relationship of love and joy. In one another, so did the pre-Fall Adam and Eve. In Christian marriage, despite our moral failures and short-sighted mistakes, men and women can find a fulfillment only a being capable of comprehensive intimacy can experience. A being made in the image and likeness of the Creator and Redeemer of all.

To See the Original Article in Canon and Culture Click Here

Rob Schwarzwalder has served as chief-of-staff to two members of Congress and is a long-time member of the Evangelical Theological Society. He currently serves senior vice-president of Family Research Council.