The University of Chicago has some advice for college students who think they need to be protected from offensive or unattractive ideas: Toughen up, kids. Free speech is good for you.

In a refreshingly direct letter to the incoming class of 2020, the U. of C. takes on the issue of political correctness run amok on campus. At many schools, a peculiar strain of narrow-mindedness infects the landscape, leading students to believe their way of thinking shouldn’t be challenged. If someone makes an argument they don’t like, they try to shut it down or retreat to their “safe space.” Theirs is a hypersensitive world of “micro-aggressions” and “trigger warnings.” 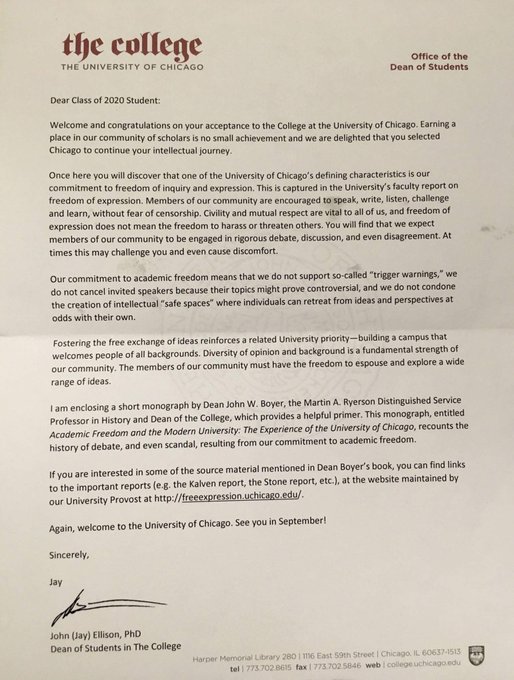 The U. of C. isn’t having it. College, the letter patiently explains, is a place of learning and discovery. Diversity of opinion is crucial, and it requires that all sides respect the right to free expression. Students who cry foul over discourse they find objectionable miss the chance to learn. They also, we would add, risk looking like babies.

The letter from the dean of students states: “You will find that we expect members of our community to be engaged in rigorous debate, discussion and even disagreement. At times this may challenge you and even cause discomfort.”

Stop right there: We expect members of our community to be engaged in rigorous debate. At times this may cause discomfort. What a stupendous school motto! If the U. of C. put those words on a hoodie, we’d buy one.

The letter continues (and it’s worth quoting here because it won’t fit on that hoodie): “Our commitment to academic freedom means that we do not support so-called ‘trigger warnings,’ we do not cancel invited speakers because their topics might prove controversial, and we do not condone the creation of intellectual ‘safe spaces’ where individuals can retreat from ideas and perspectives at odds with their own.”

“See you in September!”

We love it. We love the commitment to the marketplace of ideas, the implicit endorsement of democratic freedoms and the sheer feistiness. Intended or no, the university’s position is a direct challenge to other schools that have buckled when controversial speakers or ideas threaten to disrupt the fake idyll of groupthink.

Hmm, are we reminded of any school in particular? Yes, DePaul University.

DePaul has tied itself in knots over how to respond to conservative student groups trying to bring provocative speakers to campus. A May appearance by right-wing bad boy Milo Yiannopoulos ended in a melee when audience members shouted him down and someone grabbed away the microphone. School officials denied a request to bring him back this fall and also vetoed an appearance by another conservative commentator, Ben Shapiro. Both are showmen who revel in getting under the skin of liberals. DePaul administrators said they needed time, lots of time, to contemplate how to react to the infiltration of potentially unpopular notions.

The University of Chicago proves it’s just not that complex. The Hyde Park school has a long tradition of defending free speech, traceable at least as far back as a 1932 appearance by a communist presidential candidate. The school president at the time, Robert Maynard Hutchins, justified the visit by declaring that the “cure” for repellent ideas “lies through open discussion rather than through inhibition.

The U. of C.’s perspective is that all expression deserves protection, as long as it isn’t a genuine threat or doesn’t violate the law. In a free society, especially in a place of learning, all ideas should be permitted to be heard. They will rise or fall on their merits.

That shouldn’t be a gutsy call to make, although unctuous, squishy administrators at too many campuses have tried to coddle, and thus placate, overly sensitive students. There must be a reason why boards of trustees permit that, although what that alleged reason might be eludes us. Put simply:

Free speech is enshrined in the Bill of Rights, but also in the architecture of higher education — a realm of personal learning, expansion, growth. The fact that University of Chicago officials felt compelled to spell out the significance of the U.S. Constitution, and of what college should be, shows that today’s students have some learning to do.

To See the Original Article in the Chicago Tribune Click Here