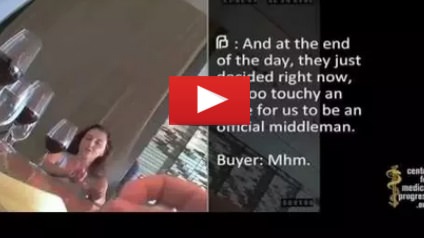 By Sandhya Somashekhar and Danielle Paquette: To See the Original Article in The Washington Post Click Here.

An antiabortion group on Tuesday released an undercover video of an official at Planned Parenthood discussing in graphic detail how to abort a fetus to preserve its organs for medical research — as well as the costs associated with sharing that tissue with scientists.

Over lunch at a Los Angeles restaurant, two antiabortion activists posing as employees from a biotech firm met with Deborah Nucatola, Planned Parenthood’s senior director of medical research. Armed with cameras, the activists recorded Nucatola talking about Planned Parenthood’s work donating fetal tissue to researchers and pressed her on whether the clinics were charging for the organs.

The Center for Medical Progress, which recorded and edited the video, says the footage proves that Planned Parenthood is breaking the law by selling fetal organs. But the video does not show Nucatola explicitly talking about selling organs. The Planned Parenthood official says the organization is “very, very sensitive” about being perceived as illegally profiting from organ sales and charges only for the cost, for instance, of shipping the tissue.

The video threatens to reignite a long-standing debate over the use of fetal tissue harvested through abortions and could add fuel to efforts seeking to ban abortions after 20 weeks of pregnancy.

In a statement, a spokesman for Planned Parenthood said the video misrepresents the organization’s work. Planned Parenthood clinics, with a patient’s permission, may sometimes donate fetal tissue for use in stem cell research, said the spokesman, who added that the group’s affiliates, which operate independently, do not profit from these donations.

“At several of our health centers, we help patients who want to donate tissue for scientific research, and we do this just like every other high-quality health-care provider does — with full, appropriate consent from patients and under the highest ethical and legal standards,” spokesman Eric Ferrero said. “In some instances, actual costs, such as the cost to transport tissue to leading research centers, are reimbursed, which is standard across the medical field.”

He accused the Center for Medical Progress of mounting a misleading attack similar to those by other groups that have tried to mount undercover “stings” targeting Planned Parenthood.

But antiabortion groups said the video shows that Planned Parenthood is essentially selling fetal organs and that Congress and other authorities should investigate.

Buying and selling human fetal tissue is illegal in the United States. Federal regulations also prohibit anyone from altering the timing or method of an abortion for the sole purpose of later using the tissue in research. Donating the tissue for research, however, is legal with a woman’s consent.

Antiabortion groups also said the callous nature of the discussion captured on film should tug at viewers’ consciences — particularly when Nucatola apparently describes “crushing” the fetus in ways that keep its internal organs intact and her remarks about researchers’ desire for lungs and livers.

The unidentified activists, a man and a woman, told Nucatola they worked for a biotech firm that aimed to snare “a competitive advantage” by providing local samples for researchers who would like to avoid lengthy trips between clinic and lab. They said they worked in Norwalk, a suburb.

“Every provider has patients who want to donate their tissue, and they want to accommodate them,” says Nucatola. “They just want to do it in a way that is not perceived as: This clinic is selling tissue. This clinic is making money off this. In the Planned Parenthood world, they’re very, very sensitive to that. Some affiliates might do it for free. They want to come to a number that looks like a reasonable number for the effort that is allotted on their part . . . ”

“You know, I would throw a number out, I would say it’s probably anywhere from $30 to $100, depending on the facility and what’s involved,” says Nucatola. “It just has to do with space issues, are you sending someone there that’s going to be doing everything . . . is there shipping involved? Is someone going to be there to pick it up?”

In order to film the footage, the activists wore “police-quality undercover cameras,” said David Daleiden, who ran the project for the Center of Medical Progress. (He refused to elaborate: “I don’t answer questions about our undercover costumes.”)

The “sting” unfolded over three years, Daleiden said, because it takes time to build up a front as a biotech company and gain access to Planned Parenthood executives. The lunch, he said, is just the beginning: The Center for Medical Progress plans to release a new video every week for the next few months.

Daleiden rejects Nucatola’s claim that costs associated with fetal tissue donation involve shipping and staff hours. “Literally the only thing the clinic is doing is carrying the fetus from the operation to the tech,” he said.

The Center for Medical Progress was established by Daleiden, a controversial antiabortion activist who previously worked with Live Action, another antiabortion group known for its “stings” of Planned Parenthood using actors and undercover videos.

The group is a non-profit organization that describes itself on its Web site as “a group of citizen journalists dedicated to monitoring and reporting on medical ethics and advances.”

“The promotional video mischaracterizing Planned Parenthood’s mission and services is made by a long time anti-abortion activist that has used deceptive and unethical video editing, and that has created a fake medical website as well as a fake human tissue website that purports to provide services to stem cell researchers,” Planned Parenthood said in a statement Tuesday.

Daleiden also alleges that the procedure described by Nucatola is similar to “intact dilation and extraction,” referred to by opponents as partial-birth abortion, which Congress outlawed in 2003. The Supreme Court upheld the law’s constitutionality four years later.

In the 1980s and 1990s, researchers considered fetal tissue transplants a budding treatment for Parkinson’s disease and diabetes. Some believed they held the potential to prevent autism.

As different kind of stem cells — embryonic stem cells — gain prominence in research, fetal tissue donations today are often used to gain deeper anatomical understanding of fetuses, said Arthur Caplan, director of New York University’s Division of Medical Ethics. The practice, however, is problematic if an abortion provider goes into a procedure with the primary intention of preserving a liver, he said. In the video, Nucatola appears to allude to methods for carefully extracting the organs.

“I think the only relevant goal of an abortion clinic is to provide a safe and least risky abortion to a woman,” Caplan said. “If you’re starting to play with how it’s done, and when it’s done, other things than women’s health are coming into play. You’re making a huge mountain of conflict of interest around a period for many people is morally difficult.”

A number of Republicans, including a few presidential candidates, reacted Tuesday to the video.

“This latest news is tragic and outrageous,” Carly Fiorina wrote on Facebook.

“This is a shocking and horrific reminder that we must do so much more to foster a culture of life in America,” said Jeb Bush on Twitter.

As politicians responded to the video, a bill to increase funding for breast cancer research was pulled from the House floor after abortion critics linked it to Planned Parenthood. The Breast Cancer Awareness Commemorative Coin Act would have raised as much as $4.75 million in research funds for Susan G. Komen for the Cure—an organization that has a longstanding alliance with Planned Parenthood to fund preventative cancer screenings. The bill was expected to pass easily, but House Republican leaders pulled it from consideration after the conservative group Heritage Action objected.

Whether the video Tuesday shows illegal activity could ultimately be irrelevant. For years, antiabortion groups promoted their cause by highlighting the sometimes disturbing details of abortion procedures and painting abortion providers as callous and unethical.

They have argued against allowing abortions later in pregnancy by suggesting that older fetuses can feel pain and they are pushing for a federal ban on the procedure at 20 weeks of pregnancy.

The accusation that Planned Parenthood is illegally selling the organs of fetuses is not new among antiabortion advocates. The controversy gained national attention in 2000, after the publication of an undercover investigation by a Texas-based antiabortion group, Life Dynamics, which was also involved in Tuesday’s ­video release.

The investigation’s conclusion, that a Kansas clinic affiliated with Planned Parenthood was participating in a scheme to profit from the sale of fetal tissues, prompted a 20/20 hidden camera investigation on the subject, and a hearing of the Subcommittee on Health and Environment in the House of Representatives.

The FBI also investigated the Kansas clinic for any wrongdoing, but later concluded that it did not break any laws.

Sandhya Somashekhar is the social change reporter for the Washington Post.

Danielle Paquette is a reporter covering the intersection of people and policy. She’s from Indianapolis and previously worked for the Tampa Bay Times.